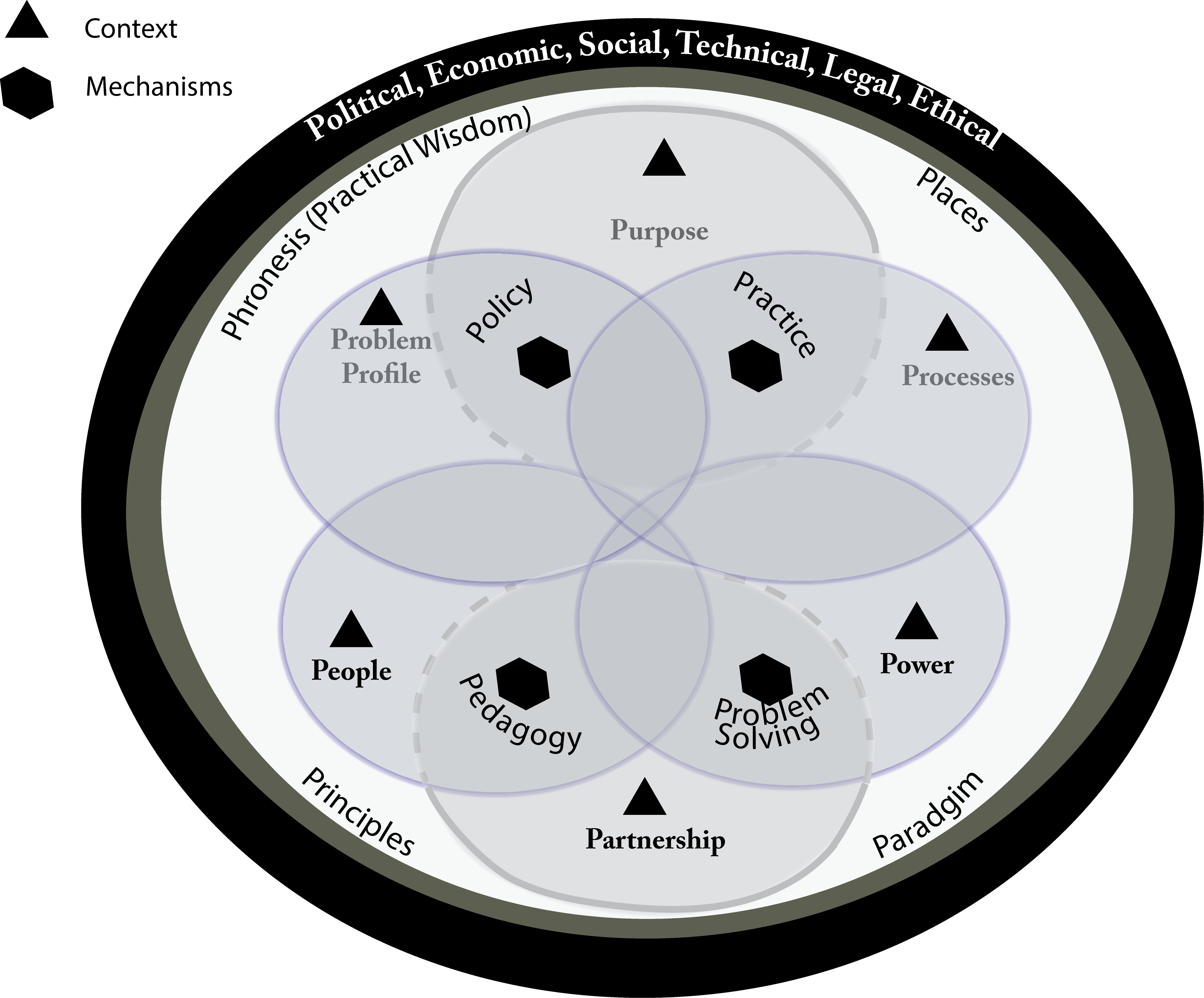 If the context is primarily focused on the core purpose (through its mission, goals and objectives), the mechanisms concern the strategic activities (by virtue of its capability, business model and control processes).  This is illustrated below.

From Values and Vision to Delivery 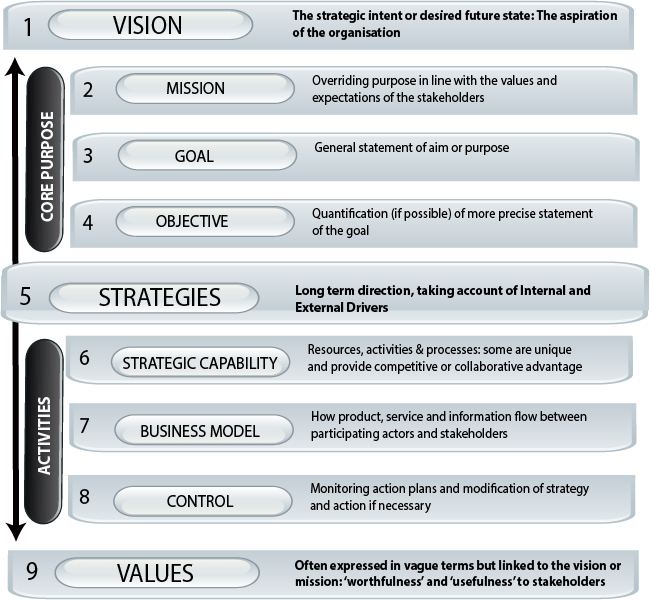 Mechanisms interact with the contextual conditions (based on  COMPASS 360° values) in seeking to achieve the high level outcomes that the vision and values seek to aspire to.  It is the mechanisms that act as ‘triggers’ to ‘fire’ particular actions that are aimed at achieving the outcomes within differing contextual conditions.

The term ‘mechanism’ is used to answer the ‘how’ questions, whereas context concerns Kipling’s remaining five honest serving fellows (‘what, why, when, where, and who’).  The term ‘mechanism’ relates to the structure or operation of a machine or other complex system: a theory or approach relating to this or a process comparable to a machine.  In more general usage, it relates to the interconnection of parts in any complex process, pattern, or arrangement through mutually adapted parts working together.

It is the mechanisms that act as ‘triggers’ to ‘fire’ particular actions that are aimed at achieving the outcomes within differing contextual conditions.  In this sense, one can consider the ‘fixed’ (or given) as the context with the mechanism representing the moving (non-given) actions including unconscious, structured sets of mental processes underlying a person’s behaviour or responses and conscious actions taken as part of the overall strategy (both reflective and reflexive).  In general usage, mechanisms are described as the means by which an effect or result is produced (representing ‘outcomes’ within a realistic evaluation framework).

Mechanisms refer specifically to what is done and how it is done. They focus on the behaviours and actions of individuals and the actions taken on behalf of organisations.  Mechanisms are aimed at ensuring that the desired outcomes are achieved within the given contexts.

Let us explore the four Ps that represent the mechanisms of the NPL framework.

The 4Ps representing the Mechanisms of NPL

The first of the mechanisms is that of policy. The provenance of the word dates from Middle English, derived from the Old French policie ‘civil administration’, via Latin from Greek politeia ‘citizenship’, from politēs ‘citizen’, from polis ‘city’.  One can thus view this from the collective perspective. In modern usage it refers to a course or principle of action adopted or proposed. The policy mechanism is closely related to the overarching context of purpose and can be considered as the means by which the purpose is put into effect.

Closely aligned to the ‘P’ of practice, policy often seeks to influence a particular pattern or a pattern of practice and it is in this respect  that strategy takes it place. The definition of practice relates to “the actual application or use of an idea, belief, or method, as opposed to theories relating to it”. It can also describe the custom­ary, habitual, or expected procedure or way of doing of something, or in the repeated exercise in or performance of an activity or skill so as to acquire or maintain proficiency in it.

Policy and practice may together rely on the extent to which problem solving occurs, particu­larly in aligning practice with the contextual problem profiles that underpin the purpose of leadership, as described earlier.

The fourteenth ‘P’ thus defines problemitisation as that to “make into or regard as a problem requiring a solution”.  In relation to leadership and the role of leaders we take into account the distinction between critical, tame and wicked problems.   A ‘tame’ problem is one in which there is a ‘tried-and-tested’ solution whereas a ‘wicked’ prob­lem is one that does not.

Practice, based on appropriate problemitisation and theory go together in defining and supporting relationships within networked environments.  If one does not inform the other, a complete cycle of leadership development cannot take place.  Invariably, these two ideas occupy attention in separate directions.

Learning and development most often takes place in complete isolation from the workplace and the day-to-day challenges faced by leaders at all levels goes untouched.  The most effective pedagogy is one which represents a virtuous cycle of learning informing practice and practice informing research and more learning.

Go back to NPL
>> Outcomes